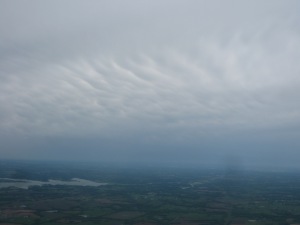 On the descent into Kansas City, Missouri, to see my father for what he thought would be a final goodbye, I felt my backbone soften into a column of meringue.  What was before me could very well require more fortitude than a lifetime supply. 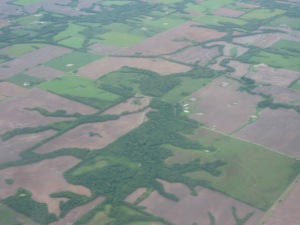 My dad can be a harmless bovine, skipping through life with great charm and a convincing dose of masculinity.

Or one of his other characters can hit the stage and suddenly the comedy turns tragic, or  childish and petulant.  One can never be sure.   The only thing about him that’s flexible is his mood.  And his idea of humor is only funny if one is cruel and unusual.

Barking orders, Dad commanded me to dial a phone number for him.  The recipient, Mick, is an old friend in his late eighties and in a home for Alzheimer’s patients.  When the front desk asked who was calling, my dad said, ‘His father.”  With his old man voice and New York accent it sounded like he said ‘his farther.’  Confused already, Mick had the switchboard  operator ask again who was calling and Dad said, “Tell him it’s his father!” Then to me he said, “Jeeze, these people, Steph.”

For fifteen minutes, he attempted to converse with Mick.  As they talked,  Dad covered the speaker with the receiver in his lap, shaking his head.  “Steph, this is so sad,” Dad said.  “He’s in really bad shape and  doesn’t know who I am.”

“Mick, it’s Arnold,” Dad said into the phone.  Dad’s name is Sol: Sol Urdang. In all honesty, he and Mick called each other Arnold for years.  But from Dad’s end of the conversation, it didn’t sound like Mick ever comprehended who he was talking to.

My Dad’s health is failing but his mind is as sharp as ever.  He despises being old because it doesn’t fit into a lifelong model of physical vanity.  Where I like to think I will age with grace, his approach waivers between rage and utter despair.

Everywhere I looked during this trip to Kansas City, towers were in my view.  Like the lyrics of a long ago song playing over and over in my head, noticing towers in a town not known for them spoke to me.  As old and sick as my dad is, he’s still standing tall, if not strong, in  his idea of what it means to be a man.  On Junes 21st, he will hit ninety, and the only thing I know for sure is, I can’t imagine what that’s like.

9 thoughts on “The Tower of Sol”