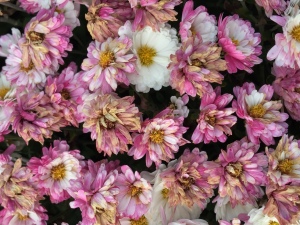 Because of my mother’s need to lighten her burden after my dad left, Melanie and I rented a house alone.  I was just out of high school and Mel was fifteen.  I drove a Honda scooter that could barely carry two up a slight incline.  Still too young for a driver’s license, Mel bought a ’51 Dodge for two hundred fifty dollars.

Its humped contour, combined with the brush-painted lilac exterior looked like a lurid Easter egg rolling down the streets.  The driver’s door handle and latch were broken, and exiting meant Melanie had to coax her window open and undo a brass slide bolt screwed to the outside of the car.

Every night that summer, we cruised Kansas City in her car with an unspoken permit for good girls gone awry.  On one of them, we attracted five boys in a three-tone rumbling jacked-up jugaad.   While they followed us down Main Street, our friend hung her torso out the front passenger window.  Before long, a dark green sedan with two women materialized beside us.

“Pull over, you little whores,” the Medusa haired passenger yelled.

Melanie and I looked at her and sang our go-to for disapproving adults: ‘What a drag it is getting old.’

“If you know what’s good for you, stop your car.”  Mel sped up.  The Dodge sputtered.  The driver forced her to jump the curb onto the empty sidewalk.  The only thing The Dodge’s tires had in common was baldness, and within seconds, two were flat.

She hit the brakes and I said, “Keep going, Mel.”

“I can’t drive on the rims!”  We learned that from our mother.

By then, Medusa was outside our window.  “Get out of that heap.”

Nearly petrified, I managed to lean toward the window and say,  “What could you possibly want.”

“I want you to get out of that car.”  In an unfamiliar work type uniform, she stood taller than our mom who was six feet, one inch.  “Where is your mother?”

“None of your beeswax,” Melanie said.

To no avail, the woman grabbed the dead door handle.  Her rage prevented her from noticing the slide bolt right next to it.  I reached across and opened the passenger door, shoved our friend out, and as we scooted across the seat to follow, our tormentor captured a handful of Melanie’s luxurious tresses.

“Steph, she’s got me!”  Turning back, I gave the woman’s wrist a quick karate chop, she let go, we stumbled onto the sidewalk and into the arms of the boys from the jalopy.  In all the commotion, we’d forgotten about them.

As motley as their car, all five circled us, including a Vietnam vet on crutches, one leg missing.  The oldest, tall, dark, and Buddha soft, grabbed the swinging passenger from behind.  She thrashed and screamed, “Little whores, they don’t know what they’re doing.”

“They’ve got the message,” he said, barely above a whisper, “You need to stop.”  As if hypnotized, Medusa collapsed and the episode came to a close.  The boys drove us home and Melanie quickly replaced the Dodge with a red Volkswagen Beetle.

Back then, I believed our independence and luck were beyond cool: they were epic.  It took many years to recognize our nocturnal forays for what they were: a need to be seen.  Otherwise, we never would have collided with the viperous Medusa and her particular desperation to exercise adult supervision.