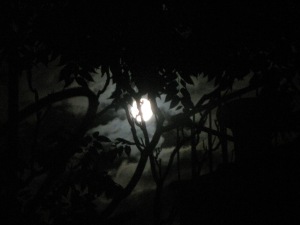 Last night was a struggle to sleep and when it finally happened, moments later I woke with a start from the sound of lovers on the roof next door.  Peering out through my closed wood blinds to see if it was true or imaginary, in the filtered moonlight, their standing silhouettes cantered in the dark with a distinct long white female arm that braced against the half wall separating us.  “On the roof?” I thought to myself.   “Really?” 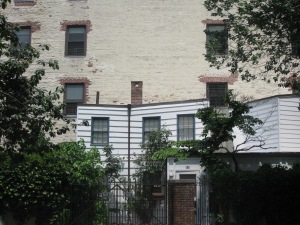 Today I found myself standing at a locked iron gate on Charles and Greenwhich streets dreaming at the diminutive Colonial crackerbox with a lovely garden.  Both are dwarfed by a painted brick apartment building that looms over its backside.  Therein is crammed with centuries of memories and history, including over four decades of my own.

When first I caught site of this nestled structure, the wall shown here did not exist.  My ex-husband and I discovered it while riding bikes in the late sixties.  The windows were boarded up.  The lawn had only bare soil, no plants or trees, not even dead ones.  There was a For Sale sign stuck in the ground: $15,000.  We screeched to a halt and entered into a short fantasy while a hot wind blew the dust of the yard in the air.  At the time, even that amount was a stretch for a couple of hippies.  And the house, a room tinier than it is now, could not have accommodated two tall people and an art studio.  We rode on.

As I stood there today, I noticed the cherry tree full of fruit, hanging over the wall.  It took me back to a night in June, late eighties or early nineties, when an old lover was visiting and we walked by this little enclave.  He reached overhead and picked a handful of the sour fruit and we ate them in the dark.  Later, too restless to sleep, we carried a foam pad, pillows and sheets to the roof of my building, and spent the rest of the night under the stars.  When he heft town, he put a note under a bowl of cherries on my table.

It’s said that home is where the heart is.  My fortunate heart exists in many enclaves that gently pull its’ strings: sites, sounds, smells, smiles, colors, memories of  richness in people, places of the past, present, and future, and cherries.

May we all spread what we have in our hearts to those who have little, and our smiles feel like home to those alone.