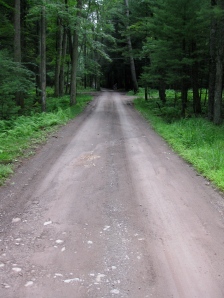 At the end of this road is an Alpine lake.

John and I were at the water’s edge,.  He held his Cairn, Jack Angus, and hand scooped a shower on his overheated fuzzball body.  While we quietly talked and he played with Jack in air thicker than water, we noticed two lanky boys sauntering down the road toward the dock. I said a soft hello.  One looked to be about ten and the other fourteen.  I watched them with fascination as they  sat and engaged in a quiet conversation on the gently rocking dock.  They seemed like ghosts from the nineteen fifties.

As the younger one looked up and listened, the oldest did most of the talking.  His unpredictable voice slid in and out of manhood, soft and wise one second and squaking the next.

I heard him tell his companion, “My Dad says if you fish only to catch a fish, you might be disappointed.  But if you do it for the enjoyment of fishing, then if you catch one, it’s a bonus.”

As we walked away, John said to me, “They seem very olde world, don’t they?’  He had noticed too but I was so curious about them I failed to notice John noticing.  The boys haunted me the rest of the day: youngsters quietly existing in this technological world.  They were without noise, sans handhelds, no jumping around or screaming or throwing rocks, just enjoying each other’s company.

I couldn’t actually remember the last time I was privy to two boys on a dock.  Where did they come from, I wondered, these little philosophers?

And then I figured it out.  The lake community where John and Kevin have their house began as a utopia in the late 1800’s, and has remained a land of ferns and fairies, and boys that are content to sit and think about things

And adults who like to be reminded of that sleepy time in life, at least on the weekends.

For more photos from another season at The Ledge, one much cooler: http://wildnaturefny/2013/0324/messages-from-the-earth.com/