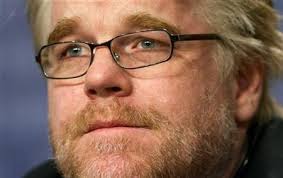 Today is a sad one, a terrible tragedy for a family, a loss for the world of film and theater.  Phillip Seymour Hoffman is no longer in the land of the living.

The news of his untimely death made me ask  what it is that put him at the top of my list of favorite actors.  True, he had a wonderfully rich voice and could transform himself to almost any character with his extreme talent.  But the thing that touched my core was his willingness to be vulnerable, to be ugly, to play the pathetic, vile and cruel, yet with a huge and dignified humanity, to be seen as weak, to be the most tender.  It took great courage to expose that range and depth of feeling, to stand on the edge of an emotional cliff that most people avoid.

On his street late this afternoon, blocked off by police barricades, fans swarmed in tomb like silence.  I brought a bouquet of flesh-colored  tulips to leave at the front of his building, but forlornly carried them home and put them in a vase.  I often saw him in the neighborhood.  Once a big force, he’s left a gaping, palpable hole.  Oh, Phillip, here’s to your big-hearted talent.  May you rest in peace, may your family find comfort.