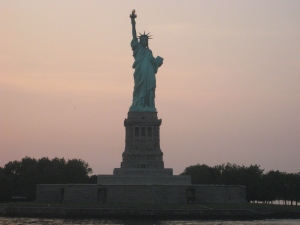 In my days of doing monologues, there was one in which part of the story was sung like a haunting lament.  The first two lines were: There was a week of nights that Bleecker street was filled with the scent of flowers.  It reminded me of the Marquez story, where one morning the ocean smelled like roses.

Marquez’s whole fishing village awoke to the ocean of rose perfume, and nothing was the same.  The scent was an omen for change.

Living in the sometimes stilted metropolis of New York means that  year after year, the  musky perfume of  the white lilac treechanges everything for the better in June.  Here we are again and it’s heavenly.  It’s not just on Bleecker.  It’s everywhere I walk, it comes through the windows, so prevelant it’s as if it originates in my mind.

I have always heard that the part of the brain that registers smell is close to the seat of the memory and they often work in tandem.  If something changed and the trees didn’t arouse my senses at this time of the year, annual chapters might be lost. And then what?  Chaos, I assume, just like in Gabriel Garcia Marquez’s story.

These days, I seldom perform but when the opportunity arises to get on the stage to tell a story, I possess more courage than before.  Life has handed it to me as a reward for living, for remembering, for climbing the illusive mountain again and again.

The word courage actually comes from the French le coeur, meaning the heart.  Living with heart means living with courage and the opposite is the same.

Jeanne D’Albret said, “Nothing is impossible to a valiant heart,” and Anais Nin said, “Life shrinks or expands in proportion to one’s courage.”