Today is June 21st, 2013 and it’s my Dad, Sol Urdang’s, 90th birthday.  His girlfriend of many moons, Lynda Owings, was born on the summer solstice too.  She is… well, considerably younger.  Each capable of filling a room with the brightest light or the darkest night, I like to fondly remind the two sets of Gemini twins on their common birthday, ‘it’s the longest day of the year.’ 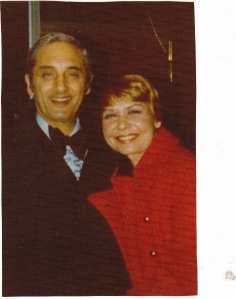 From 1977, off to the  inauguration of Missouri Governor Joseph Teasdale.

Dad in the early 40’s Coast Guard, going to war and making Sal Mineo eyes before I was even a little twinkle.

At the end of September, 2001, in NYC for the opening of the Metropolitan Opera. Most people were afraid to fly in the immediate days after 9/11, but he was determined to show the terrorists they could not stop him.  That’s my dad. 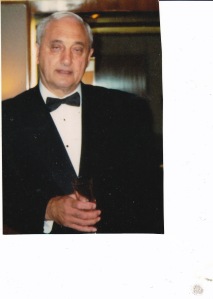 Rather than being referred to as our father, he prefers to be called, The Producer.’  That, too, is my Dad.

To read more about the man who keeps saying, “Steph, did you ever think I’d live this long,” please read The Tower of Sol by scrolling down a few posts, or continue here reading Ol’ Fuzzhead, one of my first entries.

In the fall, my eighty-nine year old father ended up in a rehab center in Kansas City with another cardiac issue.  There was only so much normalcy that one could bring into that room.  So I did my version of what our family is known to do in tough times: get in the car.

But there was no way to lift him safely into any vehicle by myself because as frail as he is, he is still very dense.  Instead, I put a jacket on him and rolled him in his wheelchair through the door of his room, down the hallway, past nurses, doctors and other ‘inmates,’ into the elevator, down another long series of hallways, right by the front desk, and out the sliding doors.

Hitting fresh air like we’d just dug through a mile long tunnel, we quickly crossed the parking lot into the vast acreage of the surrounding hills.  Going up, I pushed with every ounce of strength I had, arms stretched way out and body at a total slant.  “Steph, you’re panting down my neck,” Dad said.  “I hope you don’t die of a heart attack doing this.”  Downhill was even more labor intensive.  Keeping him in his chair and a good grip on them both involved more strength than my life normally requires.

Twice we made variations of the same rounds, but the third day I decided to cross Nall Road, a six lane major thoroughfare.  From there we went into an upscale neighborhood.  As I pushed, we talked, more than usual.  We talked because we weren’t face to face and it was easier to communicate through the grief that hung between us like a wet wool blanket.

“I miss Gretchen, Steph.  Do you ever think about her?” Dad said.

“Every day, Dad.  I miss her too.”  Gretchen, my youngest sister, died eight years ago in a fire.  Even from behind him, I could tell Dad was softly crying.

“Getting old is not for sissies,” he said for the hundredth time.  “But that’s life.”

“Yeah, I guess so.  What else can you do?”  I could feel my heart breaking in two.

By then we had reached a small man-made lake.  When we came to a little footbridge, I nearly dumped him in the gap between the sidewalk and the wood planks.  Halfway onto the bridge I thought to myself, I need to document this one.

“I’m going to take your picture, okay?” I said, stopping.

“Make sure I look good.”

“Okay, but take one from the front too and be sure you get my good side and don’t make me look toothless.”

I took the two photos under his direction.

“Ol’ Fuzzhead,” he said when he looked at them on my camera, images his eyes could barely see.

“Yeah, Ol’ Fuzzhead halfway there,” I said, through a sheet of blinding tears.